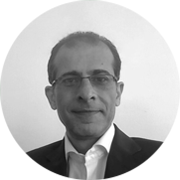 Emad is an entrepreneur with more than 25 years experience in Food, Agriculture, and Technology industries; building & ramping up startups and transforming large corporations. Emad started his career as an R&D engineer, before joining ITWorx in 1996 as a cofounder. He went on to hold commercial and strategic executive positions at Syngenta HQ from 2006-2015. In 2016, he founded and managed investment and operations startups in Switzerland in the healthy food space. He is based in Switzerland.
Emad holds a Bachelor of Science in Computer Science from the American University (1992), a Master of Business Administration from INSEAD (2006), and is expected to earn his Doctor of Business Administration degree from the University of Liverpool in 2022.